Scintacor and its precursors have been involved with glass scintillators including 6-lithium (6Li) enriched ones since 1958 (then Levy West Laboratories) when it started manufacturing these glasses with various compositions based on the work by Anderson et al. Today Scintacor is the owner of the GS20® trademark and a trusted partner of many leading research organizations and commercial customers that have chosen GS20® and the companion formulations for their unique properties, mechanical robustness, temperature range of use -200 to 250 C and resistance to all organic and inorganic solvents except hydrofluoric acid.

Scintacor offers three types of Ce-activated lithium aluminosilicate glasses distinguished by their different lithium contents of 2.4%, 6.6% or 7.5% by weight as listed in the middle column of Table 1. They are further subdivided by their isotopic enrichment as shown in the right column of the table. Lithium content and enrichment determine neutron sensitivity, which is higher for 6Li enriched glass, while 6Li depleted glass is almost insensitive to neutrons. To calculate total neutron cross sections the full glass formulation is also needed and the reader is referred to ref [1].

The properties of the glasses within each type are similar, as shown in Table 2. The control of the Ce3+/Ce4+ ratio is critical in order to achieve the correct light emission, optical decay and optical transmission characteristics [2]. The tight control of the formulation and the ability to manufacture glass with reproducible performance have enabled Scintacor to become the uncontested leader of Ce-activated lithium aluminosilicate glasses.

*Determined by thickness, increasing with decreasing thickness down to approximately 2mm
†Fast component, slow component and 90% to 10% respectively

Scintacor’s glass scintillators are manufactured as discs, rectangles and cylinders, or more complex geometries limited to maximum batches of approximately 400 grams. Standard flat dimensions range from 10 to 200mm and thickness from 1 to 50mm but larger scintillators assemblies can be produced as arrays of matched pieces. Glass can also be supplied in powder form with average particle size in the range of 38µm to 63µm for use in flow cell radio-detectors for high-performance liquid chromatography (HPLC).

The 6Li isotope offers a 940 barn cross section for thermal neutron capture via the following reaction:

The secondary particles of this reaction lose their energy within the surrounding scintillator material in close proximity to the interaction point and this gives rise to the emission of light.

GS20® glass produces ~6000 photons per absorbed neutron, is generally transparent to its emitted light, and has a relatively fast decay time constant of approximately 70 ns which gives good rate capability. The large cross section for 6Li means that even GS10 without enrichment is efficient at thermal neutron capture if dimensions are large enough. For example a 2 cm path in GS10 absorbs over 90% of the incident thermal neutrons. With enrichment in GS20® 1 mm of GS20® glass provides a detection efficiency of about 75% for thermal neutrons (.025 eV) while 95% can be reached with 2 mm of material [3].

Table 3 lists further useful references related to the response of GS20® and KG2 glasses to various neutron energies, while the moderators used at high energies are described in the references.

The Ce-activated aluminosilicate glass scintillators have the same pulse shape when excited with electrons or charged particles. This means that discrimination between gammas and neutrons is done only on a pulse height basis and not with pulse shape discrimination. The thermal neutron peak falls at a gamma equivalent energy a little above 1.6 MeV at room temperature [10], so when the gamma energy reaches the vicinity of 1.6 MeV it cannot be distinguished from the neutron signal. Corrections can be generated for the gamma signal alone using GS30 devoid of 6Li. The use of GS20® with its enrichment makes the neutron detector smaller for a given efficiency and reduces gamma sensitivity compared to GS10 configured for the same neutron sensitivity.

For applications requiring better gamma rejection, Scintacor offers ZnS:Ag/6LiF neutron detecting screens which have much higher light output (150,000 photons/neutron) and do offer pulse shape discrimination and can be used as multiple thin layers, which produce small gamma pulses. ZnS:Ag/6LiF is opaque to the emitted light and self-absorption sets a limitation to 450-500μm for light transmission, which impacts on detection efficiency [11]. In addition, while the primary decay time constant of ZnS:Ag/6LiF of 200 ns is moderately fast, afterglow can exist for 10s of microseconds and this limits in turn the count rate capability of detectors built with ZnS:Ag/6LiF scintillators [3].

In principle, reducing the glass thickness is another means to lower the gamma sensitivity of a GS20® detector (see table 4) but this come to the expense of neutron detection efficiency as well. The pulse height spectra of 1 mm thick GS20® glass is reported in figure 1, while data on gamma sensitivities are given in table 4 [12] 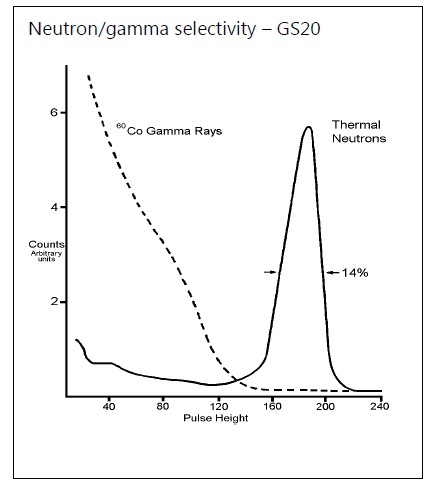 *These values will be underestimated due to the detection of degraded Compton photons. The actual error will be greatest for the 1mm thick glass and smaller for the thick samples.

GS20® glass has been adopted as the technology of choice by top tier oilfield service companies for downhole neutron-porosity logging tools, due to the ability to withstand high temperature and high shock environments. This characteristic is essential when porosity measurements are performed during drilling (LWD/MWD) and the tools are subjected to the high levels of vibration and heat generated by the drilling activity.

Neutron-porosity logging tools contain a neutron emitting source, typically an americium Beryllium (Am-Be) or Plutonium Beryllium (Pu-Be) source, or an electronic neutron generator producing fast neutrons, which travel across the formation surrounding the well. The fast neutrons with energy ranges from 4 MeV to 14 MeV, are slowed down and thermalized by collisions with hydrogen nuclei present in the pores of the rock and part of the thermal neutrons is scattered back towards the tool. Here the back-scattered neutrons are counted by two scintillator detectors placed at different distance from the source (near and far) to compensate for the borehole effects and this configuration is often referred to as compensated logging tool. The thermal neutron detection mechanism is that already described above, which generates approximately 6,000 photons for each neutron absorbed by the GS20® glass. The photons emitted by the GS20® glass are subsequently converted into electrical signal by a photomultiplier tube, to give a characteristic thermal neutron peak at Gamma Equivalent Energy (GEE) a little above 1.6 MeV at room temperature. The GS20® glass of one of the detectors is often shaped as a thin-walled cylinder to lower the gamma sensitivity. This design enables to obtain an acceptable neutron gamma discrimination up to temperatures of approximately 150° -175° C, despite the shift of the neutron GEE peak towards lower energies.

The Li-6 neutron sensitive glass has also been adopted used by leading research institutions and spallation sources around the world in neutron scattering experiments. For example, the ISIS centre at RAL (UK) utilise GS20® glass scintillators in their VESUVIO instrument; ORNL SNS utilises the glass in the SNAP, TOPAZ and MaNDi instruments. The Jülich Centre for Neutron Science (JCNS) has selected GS20® glass for their current detector prototype for the SoNDe project, a neutron detector designed to cope with extremely high count rates, which will later be shown at the European Spallation Source, currently still under construction [3].

GS20® glass scintillators are being successfully used in hand-held neutron detectors due the superior cost to performance ratio to that of other commercially available scintillators such as CLYC and 6Li-Iodide. In February 2015, the U.S. Department of Homeland Security issued a market survey report “Neutron-Detecting Personal Radiation Detectors (PRDs) and Spectroscopic PRDs”, which compared 10 commercially available PRDs and ten SPRDs with neutron detection capability. The gamma neutron pager based around the GS20® glass scored the second highest neutron sensitivity of the instruments in the report, and the manufacturer claims that this PRD exceeds the neutron time-to-alarm requirements of ANSI 42.32-2006 and IEC 62401 [13].

GS1 fine particles are been widely used in flow-cell detectors designed for the detection of alpha, beta and gamma radionuclide activity in flowing systems. The technology is applied most commonly in the biological sciences to measure the activity of radioisotope-labelled organic compounds in high-performance liquid chromatography (HPLC) effluent streams. Lithium glass is the most rugged solid scintillator and is extremely resistant to contamination. It can withstand particularly rigorous decontamination procedures. It gives acceptable but lower counting efficiencies for 14C than either yttrium silicate or calcium fluoride, therefore is rarely used for 3H measurement. Nonetheless, it is the fastest to dark adapt and the least affected by extreme ph. In comparison to liquid scintillator cocktails (homogenous cells), GS1 fine particles enable a drastic reduction of the effluents volume [14].